October 16, 2016
After the European Championships in Italy we went to Bournemouth for a few days and it was great to catch up with everyone. I also managed to squeeze in a downwind in really decent conditions. After a few days in the UK on Friday 30th Sept I would fly out to Amsterdam to race in the Dutch Coast race for the first while Pete would fly back home to Tenerife.

I entered the Dutch Coast, firstly because Joep kept on telling me that I must not miss this race and secondly I was in the UK so it would make an easy trip across to Amsterdam before I head back to Tenerife, it was going to be a very quick trip - Flying in Friday evening and leaving early hours Monday morning.

Joep is 100% correct, this is a race not to be missed. Thank you for persuading me to come and helping me find a place to stay and of course the great hospitality shown by the guys who make this event happen.

I flew in late on Friday evening so unfortunately missed the pre-race dinner. Rick Daman, my host for the weekend, picked me up from the airport and we went to his place so I could get some much needed rest before racing the next day.

On Saturday we arrived at the race venue and it was a bit cold, well for us from the Canaries it was colder than our coldest day in winter! There was not much wind but a nice swell left over from previous winds during the days before. Windguru was predicting wind, so the organisers decided to wait a little and to race at midday in the hope of the best winds. What a good call, as we were waiting around, drinking coffee, setting up boats, collecting goodie bags and generally catching up with friends the wind gradually started to pick up. Race briefing done, now it was time to get changed and put a dry set of clothes on the pre-arranged cart/trailer that would be at the finish.

We all lined up for the start and at midday the start gun went and we were off. The race runs parallel along a massive flat beach, so there is a safety car on the beach following the race as well as safety boats on the water. We race 19km up the coast to a town called Hargen. The first part of the race the runs were small, but I was having loads of fun linking runs. The wind picked up through out the race and the runs and swell just got better and better. I had a great race and was having so much fun. As you can see in the photo below, we were all smiles. Downwind conditions = happy paddlers, and everyone had a smile coming off the water......some were tired but still smiling. 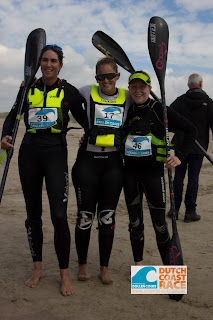 So apart from the great downwind, at the finish for the ladies we had our own truck/changing room so we could get into dry clothes. They thought of everything!

As soon as the first bus was full we headed back to the Club for hot soup and the prize giving. 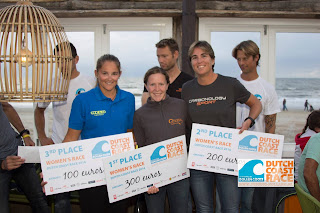 After the prize giving there was a huge dinner that was prepared for us along with a few drinks. It was a great time to catch up with everyone.

The next day we had double sit-on-top kayak sprint races. This was a huge amount of fun and I teamed up Raquel, we were the only all female crew and just had fun.....getting pounded on the way out and then surfing in on some awesome waves. We managed to get to the semi's and then got knocked out, not a bad thing as we had a hot shower before watching the final and then we gathered for a final prize giving and more much needed hot soup at the Club Zand.

This race is a great race and well organised. The guys who are behind making this race a great event have put so much into it and I will definitely be back next year, only next year I will be staying longer.

Next up in a few weeks (5th Nov) is the Pete Marlin World Surfski Series Title Race in East London - South Africa. 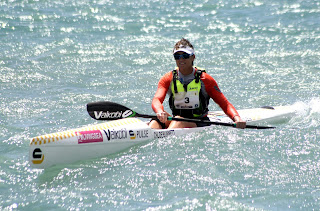